The goal of the question and answer forum is to address common questions of broad interest related to this topic. Please email your questions to Professor Datta at datta@purdue.edu. 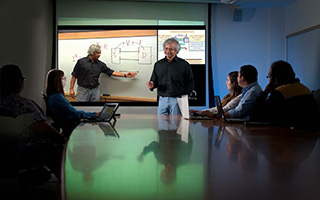 Why does the new Ohm’s law (Eq.(1.4)) involve both resistivity and mean free path ?

We can separate this into two terms and identify the latter with the ballistic resistance RB.

We can turn around the expression for RB to write, the resistivity as in Eq.(1.5) of the book:

In other words, the resistivity depends on two distinct factors, (1) the ballistic resistance RB and (2) the mean free path. The first is bandstructure-related depending on the number of modes, and the second is scattering-related.

This is NOT surprising.

Any expression for resistivity always involves two distinct factors, one bandstructure-related and one scattering-related. The Drude expression, for example, depends on (1) the electron density and (2) the mean free time.

Should the expression for diffusion time include the factor of 2? (Updated 11/02/13)

In other words, which is the correct version?

Both forms are seen in the literature. Our justification for using the FORMER is as follows.

Consider electrons diffusing in 1-D creating a linear steady-state profile. We define the time as the ratio of the number of excess electrons to the flux: 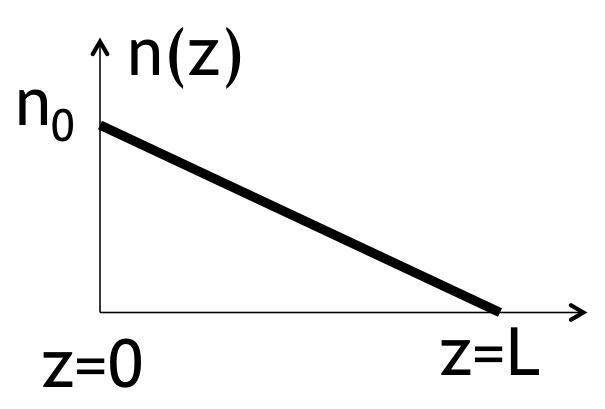 Can you use the same argument for the ballistic transit time? (Updated 11/02/13)

In this case it is easy to write down the correct answer intuitively without any ambiguity. But we could also obtain it by noting that for ballistic transport the steady-state density of electrons is constant, so that 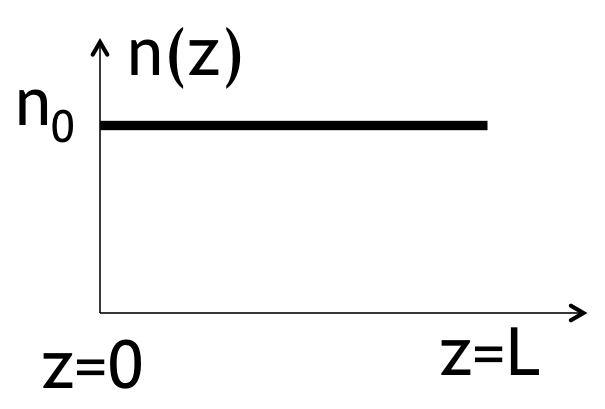 Why does your conductance formula use only half the density of states D/2? (Updated 11/02/13) 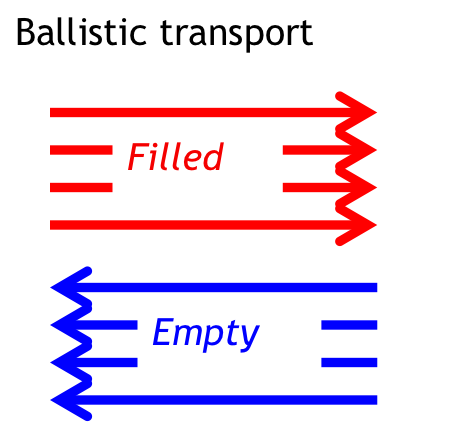 Consequently only half the states at most can be used for conduction. The same is true of diffusive transport too, but the picture is different: 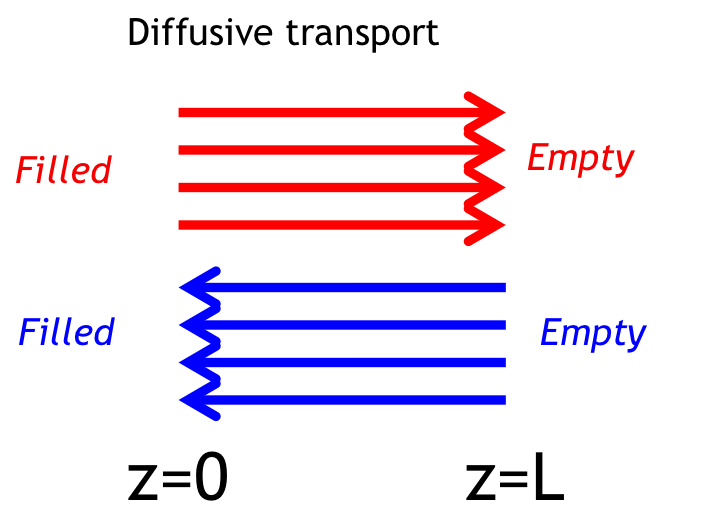 Both right-moving and left-moving states are occupied nearly equally, but they are filled on the left and empty on the right, so that only half the total states can be used.

The number of modes M(E) at an energy E is defined in terms of the product of the density of states per unit length (D(E) / L) and the velocity v(E):

This expression makes sense if we recall that the number of modes describes the flow of electrons which requires not only the availability of states (D(E)) but also a high velocity, v(E). The additional factors in 2-D and 3-D arise from the angular averaging of the velocity, see Eq.(4.8a) LNE.

A second equivalent expression can be obtained if we assume that the energy levels are described by any energy momentum relation E(p):

We can obtain M(p) in 2-D and 3-D in the same way that we obtained N(p) in 1-D and 2-D respectively: namely, count the number of states with a momentum less than p,