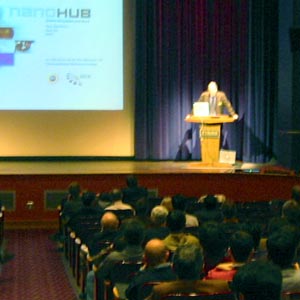 The IWCE was founded by one of the NCN predecessor networks lead by University of Illinois Urbana-Champaign in 1992. It has established itself as the core competence conference for many researchers in the area of computational electronics. The theme of the 2004 workshop was "The field of Computational Electronics - Looking back and looking ahead." Renowned leaders of the field reviewed achievements in the traditional areas of TCAD, Monte-Carlo, Quantum Transport, and Optical Processes, and connections to the new areas of molecular electronics and bio-nano devices were established. 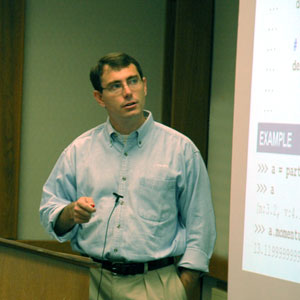 One of our pre-conference activities was a Python tutorial. About 20 people attended a tutorial designed to introduce Python as an alternate programming language. The tutorial covered topics on scientific plotting, basic numerical analysis, and also integrating Python with other languages and parallel programming. The invited speakers were Eric Jones (President of Enthought, a scientific computing company) and Travis Oliphant (an Assistant Professor at Brigham Young University).

Dr. Eric Jakobsson provided an inspiring banquet dinner speech on the connection of computational nanotechnology to life sciences. Dr. Jakobsson splits his time between University of Illinois, Champaign-Urbana and NIH in Washington. He became the first director of the Center for Bioinformatics and Computational Biology at the National Institute of General Medical Science. 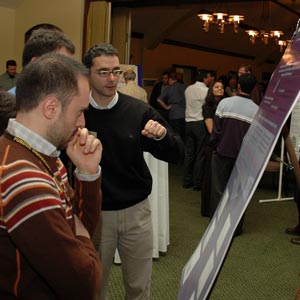 Some of the participants commented and said "Thank you very much for making it possible to attend a conference at the level of IWCE-10 here in Indiana. As a native of this state, I was pleased to find such an experience offered in a small town a few hours away from my residence rather than the major metropolitan or governmental centers elsewhere in the country", and "This IWCE has been one of the best conferences I have been to in the past years".

Conference abstracts and presentations, and the Python tutorial are now permanent resources of the nanoHUB. A special edition of the Journal of Computational Electronics is published with the peer-reviewed journal articles.

You can find more details about the conference on the IWCE web site.