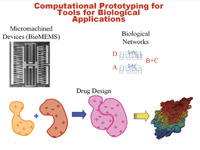 Computational tools are playing a rapidly expanding role in biology, both for engineering design and in exploratory science. The main reason is that the dramatic improvements in the measurement and mathematical modeling of basic biochemical and biological processes is making it possible to synthesize large and analytically intractable models of very complicated phenomenon. Many of these generated models are too complicated to be treated with "black-box" numerical algorithms. Instead, aspects of the biological problems must be exploited, or different formulations investigated, to develop computational procedures that are efficient enough to provide timely feedback to a designer or researcher. In this talk, we describe three cases of the development of computational tools for specific biological applications: electrostatic-based ligand design (drug design), design of micromachined devices for biological applications (biomems), and the analysis of collective behavior in cells based on biochemical network models. In each of these cases we will describe at least as many challenges as solved problems, and then we will conjecture about how to train the next generation of researchers who will continue in this work.

Professor Jacob K. White is an Associate Director of the Research Laboratory of Electronics and the principal investigator of the RLE Computational Prototyping Group at MIT. He is a pioneer in numerical methods, particularly in computational prototyping tools and techniques for integrated circuit interconnect, circuit packaging, and micromachined devices. Professor White's current research interests include numerical algorithms for problems in circuit, interconnect, and microelectromechanical system design and the application of these techniques to problems in biology and medicine. Jacob White received his BS and MS degrees electrical engineering and computer science from MIT in 1980 and1983 and his doctorate in 1985 from the University of California, Berkeley. After working at the IBM T. J. Watson Research Center, he joined the MIT faculty in 1987 where he was promoted to full professor in 1996 and as an Associate Director of the Research Laboratory of Electronics in 2001.