A robust method for single cell access to deliver genes and small molecules to primary and sensitive cells is needed to advance the state-of-the-art in personalized medicine and therapeutics. To realize this goal, a microfluidic chip, so-called nanofountain probes (NFP), has been developed for cell transfections using electric fields. The technology enables in vitro singlecell electroporation with very precise force and dosage control to achieve high cell viability. A localized electric field in the form of a square pulse with variable time duration is applied at the site of contact between probe and cell. This creates temporary pores on the cell membrane to facilitate dosage-controlled entry of biomolecules into the cytosol. To avoid excessive force on the cells and to increase viability after electroporation, the onset of probe-cell contact is detected using a change in the electrical resistance. Furthermore, dosage of the injected biomolecules into the cells is regulated through electric pulse duration. We have demonstrated NFP electroporation (NFP-E) of single HeLa cells within a population by transfecting them with fluorescently labeled dextran, green fluorescent protein (GFP) plasmids, proteins (BSA), and molecular beacons (DNA hairpins with fluorophores used to detect mRNA). Cells were imaged to evaluate the transfection efficiency and cell viability. Moreover, theoretical analysis of the NFP-E delivery mechanisms revealed that application of an electric potential of a few hundred millivolts, between the NFP cantilevered tip and the region of the cell membrane in contact with the tip, creates nanopores in the cell membrane through which molecules diffuse to the cytoplasm. Experiments on HeLa cells confirmed that NFP-E offers single cell selectivity, high transfection efficiency (>95%), qualitative dosage control, and very high viability (92%) of transfected cells.In this presentation, the advantages of NFP-based electroporation over other transfection and bulk electroporation techniques will be discussed. In particular, we will show results demonstrating precise molecular delivery while minimizing stress to the cell. The presentation will also discuss the NFP technology impact in applications such as single cell gene delivery, stem cell research, drug discovery, and cell cloning. 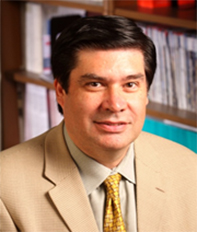 Horacio Dante Espinosa (Northwestern University) is the James and Nancy Farley Professor of Mechanical Engineering and the Director of the Theoretical and Applied Mechanics Program at the McCormick School of Engineering, Northwestern University. He is a foreign member of the European Academy of Sciences and Arts and of the Russian Academy of Engineering. He is also Fellow of the American Academy of Mechanics, the American Society of Mechanical Engineers, and the Society for Experimental Mechanics. He received two Young Investigator Awards, the NSF-Career and the Office of Naval Research-Young Investigator Award in 1997. He also received the American Academy of Mechanics (AAM) 2002-Junior Award, the Society for Experimental Mechanics (SEM) 2005 HETENYI Award, the Society of Engineering Science (SES) 2007 Junior Medal, and the 2008 LAZAN and 2103 Sia Nemat Nasser medals from the Society for Experimental Mechanics. He was the 2012 President of the Society of Engineering Science.
Professor Espinosa is also the founder and chief scientific officer of iNfinitesimal LLC, a nanotechnology company developing robust next-generation nanoscale devices, scalable nanomanufacturing tools, and microdevices for single cell transfection and analysis.

University of Illinois at Urbana-Champaign