3-D Molecular Dynamics Simulation of a Gallium FIB on Silicon

See the  FIBMD GitHUB Homepage for a detailed description of tool output and a tutorial on using the provided Ovito template for visualization.

This is a tool used for modeling the effects of a focused ion beam against a silicon film, including sputtering, crater formation, and nanopore formation. The user adjustable parameters are focused on what would be adjusted in an experimental setting, such as beam energy, angle of incidence, spot size (FWHM), current, and silicon temperature. Real-time output of the simulation is available through periodically reported simulated time and system temperature. The py3DMol jupyter package is used to provide a built in 3D viewer of the system.

In this tool, the Stillinger-Weber atomic potential is used for silicon-silicon interactions, while a Molière atomic potential is used for silicon-gallium and gallium-gallium interactions. The silicon FIB target is presented as a film with the outermost layer of atoms in the x-y planes fixed in position and the top and bottom 'z' surfaces exposed to vacuum. FIB ions will be incident to the top 'z' surface, and as atoms are sputtered from either the top or bottom of the film, they are relocated into fixed planes above the target for convenient counting. 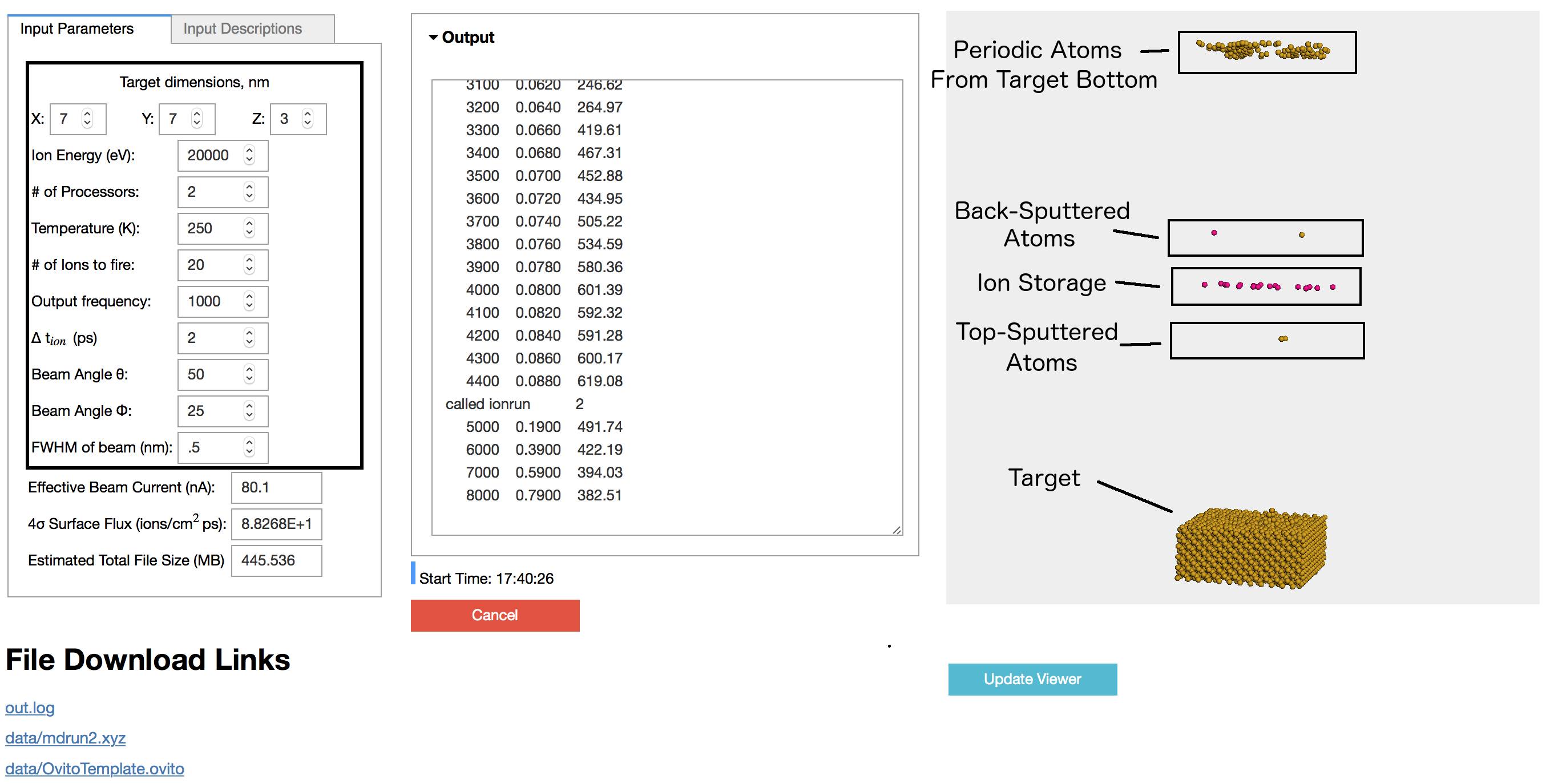 Descriptions of each input parameter are provided in the 'Input Descriptions' tab on the left menu: 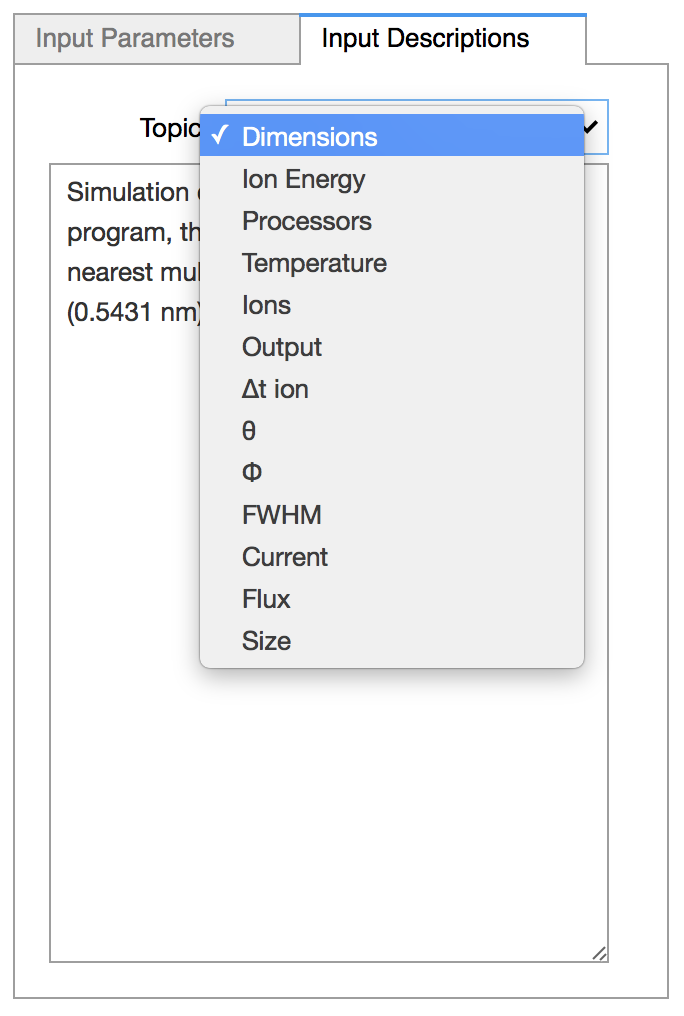 The simulation begins with an initialization of the silicon temperature through a Berendsen thermostat applied uniformly to the domain. Once system temperature has approached to within 30 K of the target, a gallium ion is randomly positioned above the surface according to the assigned FWHM. It is then assigned kinetic energy equivalent to the beam energy and a velocity vector according to the angle of incidence. As the ion deposits energy to the target, a Berendsen thermostat with a time constant of 0.1 ps is applied to silicon atoms within 1.5 nm of the clamped edges to model conduction out of the film. To aid in resolution of the fast moving ions, one of two timestep values is chosen according to the atom with the highest kinetic energy in the system: 0.02 fs for energies above 600 eV and 0.2 fs for energies below 600 eV.

There are 3 forms of output available in this tool.

After hitting the 'run' button, an output log documenting the progress of the simulation is provided under the 'output' tab. This includes the current time of the simulation, some initialization parameters, temperature of the system, and a notification for when the time step size changes. The contents within this output window are available for download by clicking the 'out.log' link under 'File Download Links' within the tool. See the GitHub page for a more detailed explanation of these contents.

Visualization is provided through two methods: in-tool through py3DMol and out of tool through an xyz file. In-tool visualization is accessed by clicking the 'Update Viewer' button, which will refresh the viewing window with the atomic positions of the most recent output step. The contents of this window may be rotated by click-dragging, zoomed with the scroll wheel or two-touch up/down with supported track pads, and translated with control + click-drag.

A more comprehensive output file containing atomic positions and kinetic energies at multiple timesteps is provided through the 'data/mdrun2.xyz' link under 'File Download Links'. This follows a typical .xyz file format, with a row for each atom and columns corresponding to the x, y, z atomic coordinates, atomic type, and kinetic energy in eV. This file may be used for much more detailed analysis using a program like Ovito. A suggested Ovito program state for viewing this file is provided by the 'data/OvitoTemplate.ovito' link under 'File Download Links'. See the GitHub FIBMD page for a tutorial on using this.

Joshua M. Stout -- Mechanical Science and Engineering at the University of Illinois Urbana-Champaign

Jonathan B. Freund --Mechanical Science and Engineering & Aerospace Engineering at the University of Illinois Urbana-Champaign

Harley T. Johnson -- Mechanical Science and Engineering at the University of Illinois Urbana-Champaign

Moliere G, Theory of scattering of fast charged particles. I, single scattering in a screened Coulomb field, Z. Naturf. A 2, 133 (1947).

Nanoscale Manufacturing at The University of Illinois

This resource belongs to the Nanoscale Manufacturing at The University of Illinois group.