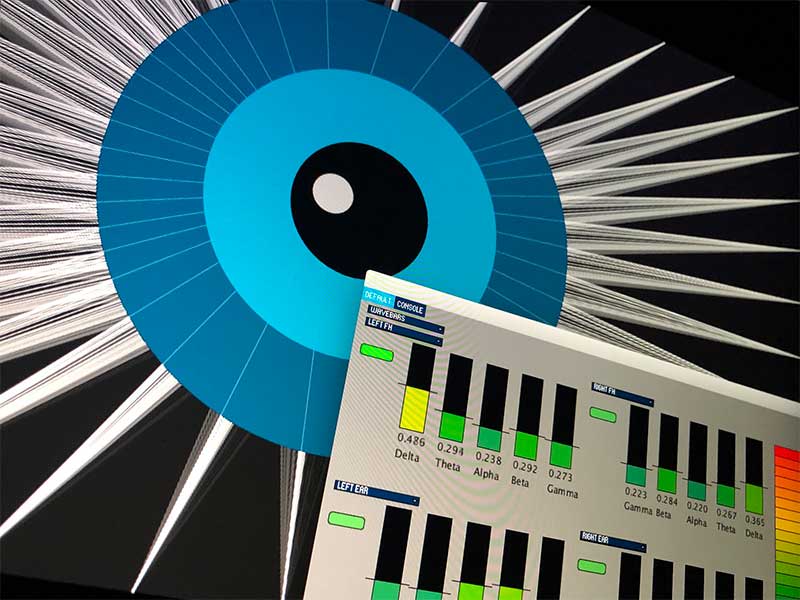 ArtWaves is an experimental visual feedback system that examines the relationship between brain signals, computing, design, visualization, and visual expression. The work translates a participant's brain waves and cerebral cortex topological levels of activity into visual forms presented on a video wall. Colors and shapes are influenced by different levels of brain wave activities. Brain signals are sampled in real time using a non-invasive electroencephalogram (EEG) headset. Signals from the EEG sensors are transmitted via bluetooth and wifi to a visual processing system that separates them into bands representing the alpha, beta, gamma, delta, and theta waves. The strengths of these signals are further processed to create the artistic display.

As the intersection of art and technology continue to evolve, the use of computer algorithms associated with brain signals will greatly impact the process of viewing, experiencing, and making art in the 21st Century. In ArtWaves, the object of contemplation, the visual form, is an active extension of the user’s brain levels of activities. This work changes the traditional approach to the experience of art in which the object of observation sits passively waiting for the viewer’s response. Here, the artwork (the observed) also functions as a tool for the participant to peek "into" his or her own mind as expressed in brain signals and their levels of activities.

ArtWaves emerged as an interdisciplinary collaboration between digital artist Petronio Bendito, Associate Professor of Visual Communication Design in the Patti and Rusty Rueff School of Design, Art and Performance, and computer scientist Tim Korb, former Assistant Head in the Department of Computer Science, both at Purdue.

Petronio Bendito is a new media designer, artist, and educator. HIs creative and scholarly works investigate digital color design methodologies, and the intersection of art, design, science, and technology. He teaches digital media design in the Visual Communication Design program at Purdue University (USA) in the Rueff School of Design, Art, and Performance. Through his practice, Bendito examines digital color design methodology and aesthetics, visual literacy, visual thinking, and educational technology. He has worked extensively on interdisciplinary projects bringing together a wide range of professionals, approaches, and disciplines, including art, design, mathematics, computer science, neuroscience, UX design, music, dance, choreography, theater, and light design. He serves on the editorial board of the Journal of Visual Literacy and co-curates the biannual Intersection of Art and Science exhibit at Purdue. He lectures and presents his work and collaborations internationally.

Originally from Brazil, Petronio Bendito earned Doctoral (Ed.D.) and M.F.A. degrees from Northern Illinois University and a B.F.A. from Central Michigan University. He also studied at the Federal University of Paraíba in Brazil, and Purdue University. He has taught art and design courses at Northern Illinois University (USA), DePaul University (USA), and a Summer program at the American University of Paris (France). During his appointment as a visiting professor at Chulalongkorn University/Faculty of Education (Thailand), he worked with graduate students on several research projects. Bendito co-designed and co-taught a multimedia course in the Visual Communication program at Beijing Institute of Technology (China) and has led Color Design workshops in universities in Brazil, France, and the United States.

Tim Korb is the Assistant Department Head of the Computer Science Department at Purdue University. He was previously at the University of Arizona, where he was a co-designer of the Icon programming language. His technical interests also include operating systems, networking, databases, and security.