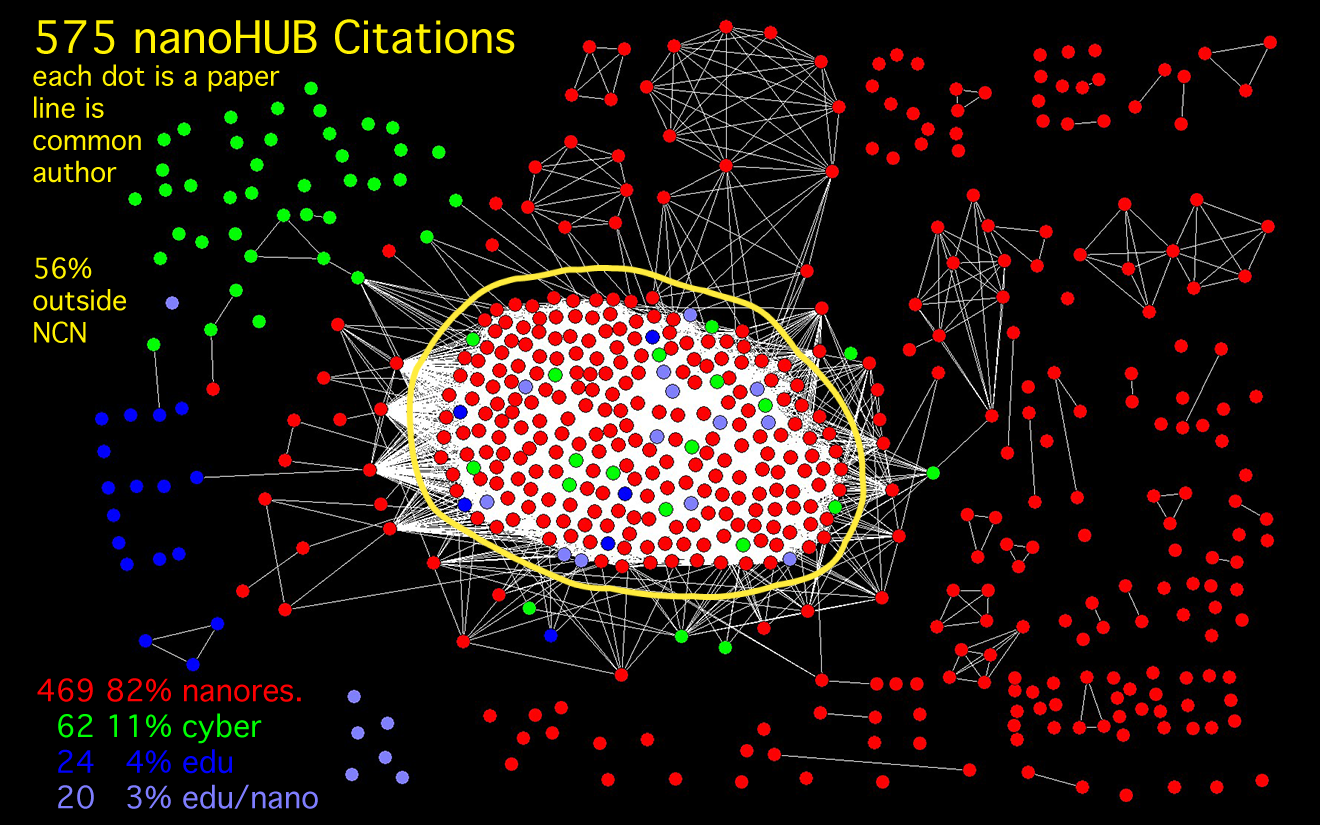 We have identified 575 citations to nanoHUB in the scientific literature with 56% of these citations attributed to investigators who are not in any way affiliated with NCN. The citation map provides a visual representation of affiliated and non-affiliated investigators. Non-affiliates appear outside of the dashed line. Researchers affiliated with but not funded by NCN are responsible for many of the remaining citations. NCN clearly is strongly networked through research papers, with networks being developed outside of NCN. Some of the outside networks are completely decoupled from NCN. 509 (89%) of the citations appear in peer-reviewed journals, conference proceedings, book chapters. Ph.D. or Master’s thesis. 469 (82%) pertain to research in the nanotechnology field. Thus, the vast majority of citations refer to actual nanoHUB.org use.

Two years ago we began charting citation network maps to address the question of whether nanoHUB can indeed be used for research. The documented citations and their extent into the non-NCN-affiliated nano community exceed those of any other science gateway we are aware of. Next the question arose: “Is it good research?” In the past year we have begun to address that question by asking: “Are the papers that cite nanoHUB subsequently cited by other authors?” We have interacted with Luo Si, professor of computer science at Purdue, who helped us to mine the Google Scholar service to obtain the secondary citations to the nanoHUB citations. Let’s imagine nanoHUB as the author of the 575 papers citing nanoHUB. We have found 3,251 citations to these 575 primary papers such that the h-index is 27. That means 27 of the primary papers have at least 27 citations. Considering that the first primary papers appeared in 2000, the “beginning of nanaoHUB’s scientific career,” nanoHUB exceeds the typical value of 10 for the h-index of a professional with 10 years of experience.

The most recent citation lists can be found here, ordered by the number of secondary citations. The interactive table can be explored easily – you can look at “nano” publications only, look at NCN external papers, etc.

The NCN does have the specific goal to place simulation tools into the hands of experimentalists. The article “Use by Experimentalists” provides a few examples of such impact on experimental work.