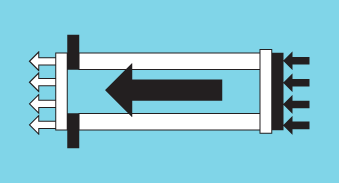 This tool will enable the users to run thermal conductivity simulations on various Si/Ge structures by non-equilibrium MD with LAMMPS package. Pure Si/Ge bulks, pure Si/Ge square nanowires, or supperlattice Si/Ge nanolaminates and nanowires with different periodicity can be selected from the prebuilt structures. Also, users can create Si/Ge supperlattice structures with different sizes and the number of priods by their own. In addition to thermal conductivity, energies, temperature profiles, and atomic trajectories during the simulation will also be output.

This tool allows users to simulate and optimize TPV performance when using these components at a system level. Users specify the materials and the geometric structure of the selective emitter, filter, and TPV diode. This information is subsequently supplied to two simulations: a finite difference time-domain simulation, known as MEEP, which yields the thermal emission spectrum of the photonic structure; and a Fourier modal method simulation, known as S4, which outputs the filter spectrum. Both of these results are then combined with other data provided in the GUI to yield the overall TPV system efficiency.

We find that a small change in the size of the AFM cantilever caused by thermal expansion from the laser is measureable. Our simulated results suggest that both the laser power and spot positions significantly change the resonant response of the cantilevers. AFM cantilevers are resonated during the tapping mode.

Simple 1D Finite Difference Method Tool for Undergraduate Heat Transfer Course.  This tool solves 1D conduction heat transfer problems. It uses boundary condition types 1, 2 and 3, but does not include generation. This tool is meant to be an educational tool for an undergraduate heat transfer course.