Why publish a tool in nanoHUB?

Advantages of making your simulation tool available via nanoHUB:

From Computational Materials Science and Engineering Education: An Updated Survey of Trends and Needs:

Multiple ways to publish a tool

If you would like to deploy a workflow, creating a Jupyter Workflow will be your best option. If you already have an X11 GUI that you'd like to use, you can create a tool with that method.

Which is the best for your purposes?

Still can't decide? This decision tree will guide you through the process. 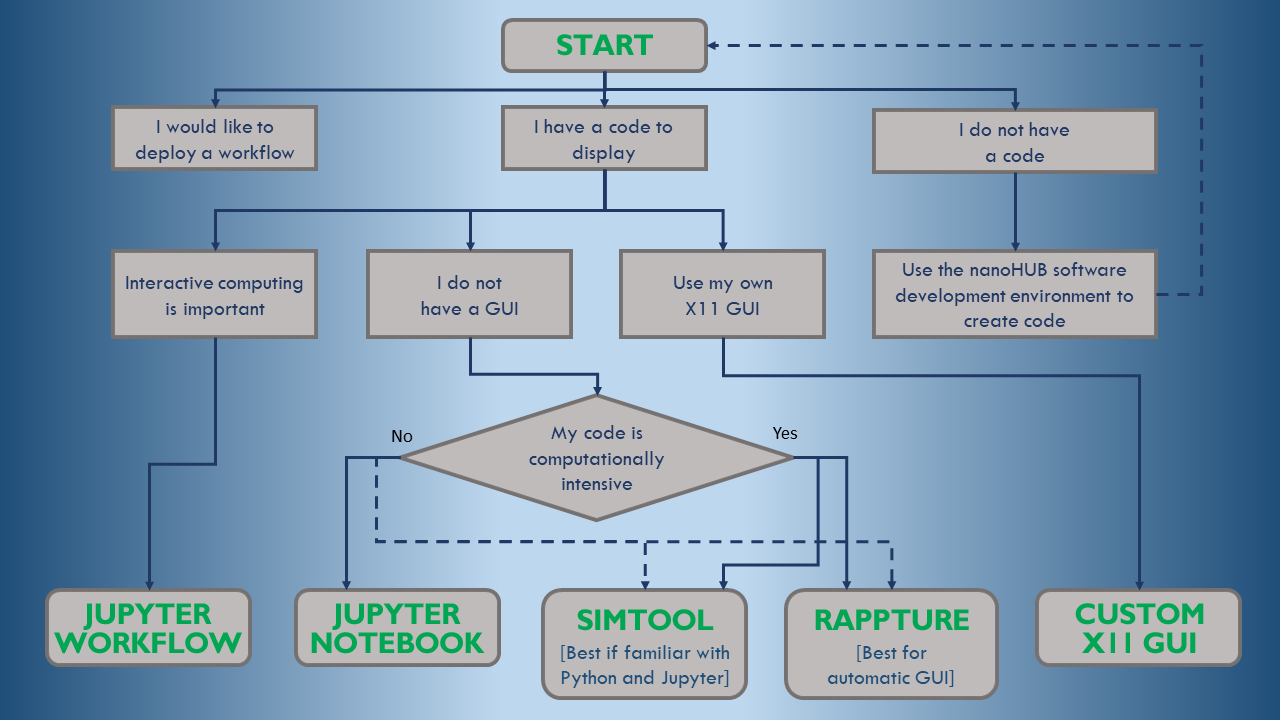 PUNCH began as a project to create an Internet computing platform that would provide a distributed computing portal on the early World Wide Web. Applications could be installed "as is" with simple web form interfaces for uploading and editing input files, running the application in a batch mode, and then retrieving, viewing, or post-processing output files, or applications could have more elaborate web interfaces constructed within PUNCH to activate an infinite variety of different application flags or preprocessors and postprocessors automatically. Later versions of PUNCH added virtual filesystem support to execution nodes, support for VNC-based graphical, interactive application use, and even began linking to Condor and Globus submission. PUNCH was designed to allow users access to complex software packages without suffering through difficult installation processes or familiarizing themselves with arcane commands.

Early implementations of PUNCH focused on scientific simulation applications for three different disciplines: Computational Electronics (CE Hub), Computer Architecture Research and Education (NETCARE), and Electronic Design Automation (EDA Hub). Of these, the Computational Electronics Hub was the most successful, first brought online in 1996, and a few years later it was transformed into a hub more specialized on Nanotechnology, becoming the first incarnation of "nanoHUB".

The architecture of a PUNCH system consisted of a web server and one or more backend execution nodes where applications were run. In the PUNCH environment, all users' operations ran in the context of captive shadow accounts. The applications provided in this environment were necessarily highly restrictive so that an individual user could not exploit flexibilities in the software to either run arbitrary commands or access other users' files.

Later developments for PUNCH included support for graphical, interactive sessions via VNC, with connections made directly to the applications running on the backend systems. In order to enable this, a virtual filesystem subsystem was also developed to export user home directories to remote execution hosts. The job-scheduler was broken out into a distinct subsystem, and some primitive load balancing was done there to improve the overall efficiency of PUNCH jobs. Early testing on integrating Condor and Globus submission was complete by 2001.

Although it was a significant achievement for its time, PUNCH suffered from a number of shortcomings. First, it required a specialized web server in order to work, and the operations of PUNCH were integrated into its own HTTP 1.0 server. Because of this, modern features of Apache could not be fully utilized, and active development of the HTTP server portions of PUNCH fell behind. Also, PUNCH was designed in a research project environment and robustness, reliability, and maintainability of the codebase was not a high priority. Over time, this led to a great deal of maintenance necessary to ensure proper operation of the services. Additionally, although simple input file applications could be quickly and easily added into PUNCH, constructing a better, more intuitive form input system for an application in PUNCH could very extremely time-consuming. Finally, while graphical interface support was added, the principle mode of operation was still form-based, a user interface which modern computer users found increasingly undesireable, and form-based batch application support code in PUNCH was, like the HTTP code, becoming just unnecessary baggage.

Because of these shortcomings of PUNCH, several projects emerged in an attempt to improve upon it. In spite of all its problems, PUNCH remained in operation concurrent with all the other middlewares to follow it listed here below until 2007, and its 12-year operational lifespan is a testament to its success.

The In-VIGO project built upon lessons learned from the development of PUNCH. Namely:

As a result, the In-VIGO system was designed with the following features:

In-VIGO was used through nanoHUB by bridging operations from one web server to the other and occasionally directly modifying entries in the In-VIGO database. Because the combined system was spread out over two web servers and databases, session handling was complicated, application startup required several seconds and error handling was tenuous. In the event of a failure, it was difficult for the end user to diagnose the problem.

In-VIGO has a rich capability for specification of form-based interaction which was, unfortunately, not directly applicable to the mostly graphical applications used in nanoHUB. Nevertheless, deployment of any application still required configuration of the command-line based tool. Additional operations were necessary at invocation time to access a graphical interface for the application. This style of specification also contributed to the delays in both application deployment and middleware session startup.

Further information about In-VIGO is available at the In-VIGO page.

Narwhal was built with the following goals in mind:

Narwhal was built in the following manner:

Because the Narwhal system constituted a session controller for Unix systems, it could naturally provide a number of other benefits. Primarily, it allowed for the invocation of workspace sessions consisting of a typical Unix/X11 window manager in an environment that was the same as the general application environment. This allowed for ease of transition between development and deployment of applications. Because all files were owned by the respective users, it was possible to employ per-user quotas on the fileserver so that one user could not accidentally or deliberately use all of the storage space.

Components of Narwhal acted in parallel to allow for fast session creation. For instance, dynamic port mapping could be done at the same time as filesystem configuration. Furthermore, pre-caching of services was done as much as possible. VNC servers were allocated in advance of their use so that when a user requested a new application session, an appropriate execution host could be selected and the application started without having to wait for the display server to start. The user-perceived application start time was reduced to 4-8 seconds.

Narwhal incorporated a mechanism that monitored presence of a viewer on each VNC server. If a particular application's VNC server lacked an observer for longer than a configured timeout, the application was terminated. This allowed the system to automatically avoid unchecked growth in resource consumption and removed the burden from the user of having to manually terminate every application that he or she was no longer interested in. The cumulative time that each session was viewed was reported to the middleware and recorded in the statistics database where it could be used for further analysis by application developers.

Reliability of the Narwhal system was achieved by redundancy, retries, and triage of subsystems. The core philosophy of the development of the systems was that some systems will occasionally fail, and that the end user should not be made aware of this unless there was no other means of recourse. For instance, VNC servers sometimes fail at startup due to locking failure, or unknown race conditions. When a host is selected on which to start a VNC server, the status of the operation is checked. If failure is detected, the operation is retried. If failure persists, the conditions are recorded and the system avoids use of that particular subsystem. A secondary or tertiary choice for a host system is then used and the process continues. When all avenues are finally exhausted, the user and administrator are notified that some larger, general failure has occurred. Because resources such as VNC servers are pre-started in advance of their need, the additional delay in creating the server is hidden from the end user.

Narwhal offered the ability to be able to stress-test systems in advance of production use. A development environment could be prepared in which an administrator could start, for instance, 1000 random application sessions in rapid succession. Alternatively, 100 sessions could be started simultaneously (as would happen when students in a laboratory classroom started to use the system). By conducting tests of this nature, bugs in the software were found and corrected. The expected behavior and capacity of the system could also be established in advance of production needs.

The name "narwhal" was not an acronym and did not refer to anything. It was a name chosen at random in the hope that someone would come up with something more meaningful. For lack of a better name, most people referred to it, colloquially, as "In-VIGO Lite."

Maxwell is a middleware system designed to provide the next generation capabilities of a true science gateway. Despite the stability and reliability of the Narwhal system, its shortcomings were clear and were increasing in importance:

To address the deficiencies in Narwhal, a system was designed with the following new features:

Compared to previous middleware systems, Maxwell is very web-server-centric. Instead of using a port router "firewall" host, the web server uses a daemon to dynamically relay incoming VNC connections to the execution host on which an application session is running. Instead of using the port router to set up a separate channel by which a file import or export operation is conducted, Maxwell uses VNC to trigger an action on the browser which relays a file transfer through the main nanoHUB web server. The primary advantage of consolidating these capabilities into the web server is that it limits the entry point to the nanoHUB to one address: www.nanohub.org. This simplifies the security model as well as reduces on the number of independent security certificates to manage.

One disadvantage of consolidating most communication through the web server is the lack of scalability when too much data is transfered by individual users. In order to avoid a network traffic jam, the web server can be replicated and clustered into one name by means of DNS round-robin selection.

The backend execution hosts that support Maxwell can operate with conventional Unix systems, Xen virtual machines, and a new form of virtualization based on OpenVZ. For each system, a VNC server is pre-started for every session. When OpenVZ is used, that VNC server is started inside of a virtual container. Processes running in that container cannot see other processes on the physical system, see the CPU load imposed by other users, dominate the resources of the physical machine, or make outbound network connections. By selectively overriding the restrictions imposed by OpenVZ, we can synthesize a fully private environment for each application session that the user can use remotely.

The improvements over Narwhal represented a shift in philosophy from a middleware system that allocated resources to one that regulated access between systems and between zones of security. This is similar in spirit to James Clerk Maxwell's Dæmon—a thought experiment where a hypothetical shutter regulated the movement of molecules between two chambers. Furthermore, the use of the term daemon was already prevalent in the vernacular of software system architecture. It was for these reasons that the name "Maxwell" was selected.