The two major barriers to realizing a viable large-scale hydrogen economy are hydrogen storage and economically viable “green” hydrogen production. The current two preferred methods of hydrogen generation are water electrolysis and the decomposition of natural gas (methane). Even though both methods are approaching economic viability neither of them are “green.” Electrolysis to make hydrogen, although green in itself, uses grid electricity which is produced by burning coal; hence, electrolytically produced hydrogen gas is not green. Methane, CH4, when oxidized to produce hydrogen gas, also produces carbon dioxide, and water; hence, it is also not green. 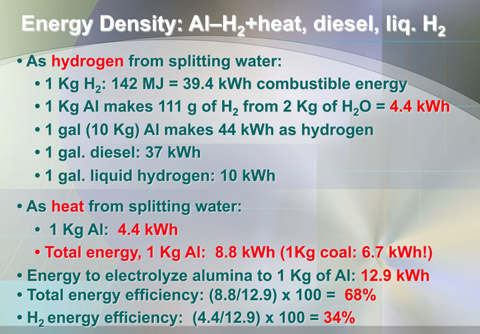 On the other hand Al metal is a safe, abundant, renewable, high energy density (see above) material that when formed into an Al-rich alloy with only a 5 wt% mixture of gallium (Ga), indium (In), and tin (Sn), will efficiently and rapidly split water the make hydrogen on demand, (see images 1 and 2). Since the small Ga and In components are expensive but inert (see image 3), they can economically be recovered by mechanical separation, e.g. using a centrifuge.

Technology sustainability and large scale use

The total energy produce per kg of Al is 8.8 kWh; half as heat and half as the energy of combustion of hydrogen. The spent Al(OH)3 is easily rejuvenated back to metallic Al using the well-established commercial Hall-Heroult electrolysis. Currently carbon electrodes are used, thus generating some carbon dioxide, but a commercial TiB2 electrode technology for Al smelting has been developed by the De Nora Company to displace carbon electrodes. Since most smelting operations are done with hydroelectric power, i.e. not using fossil fuels, Al smelting could become totally green.

Before we need to worry about smelting aluminum hydroxide to recover Al, however, we can use the 400 billion kg of scrap metal on the planet that has already had its carbon footprint amortized. Therefore, this Al is green and can produce 44.4 billion kg of hydrogen or nearly 195 trillion Wh of hydrogen energy (see below). 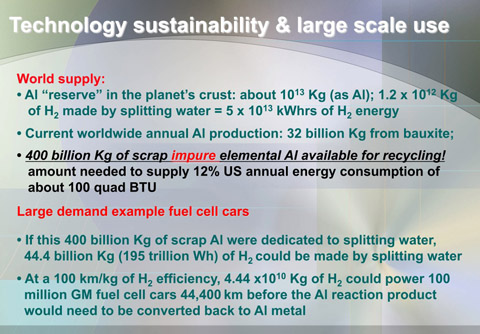 Finally, there are many applications for which this technology could be used: