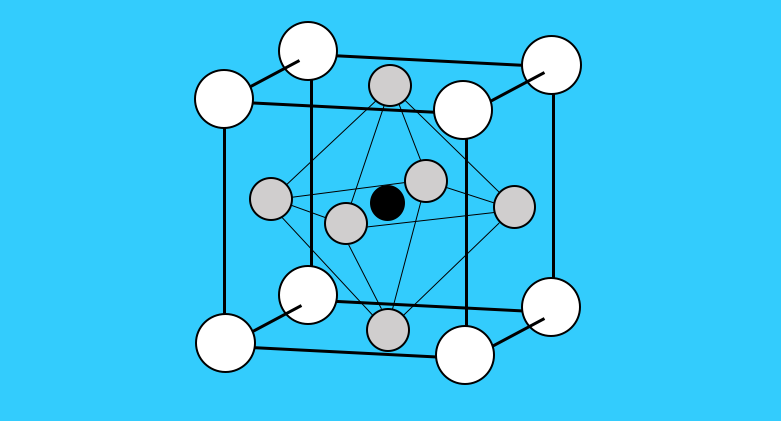 This tool allows users who are experienced with LAMMPS to upload a command script and data file for any system and run LAMMPS either as a serial calculation or a parallel run on a HPC system.  Users can upload command scripts with pair_style kim, and the tool will automatically download and load Models from the OpenKIM repository. 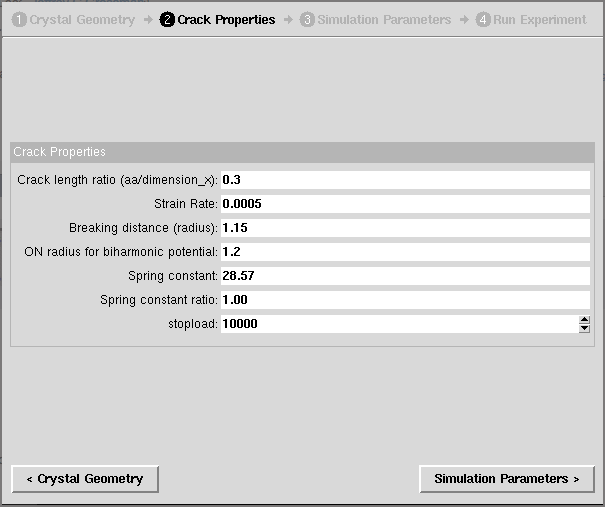 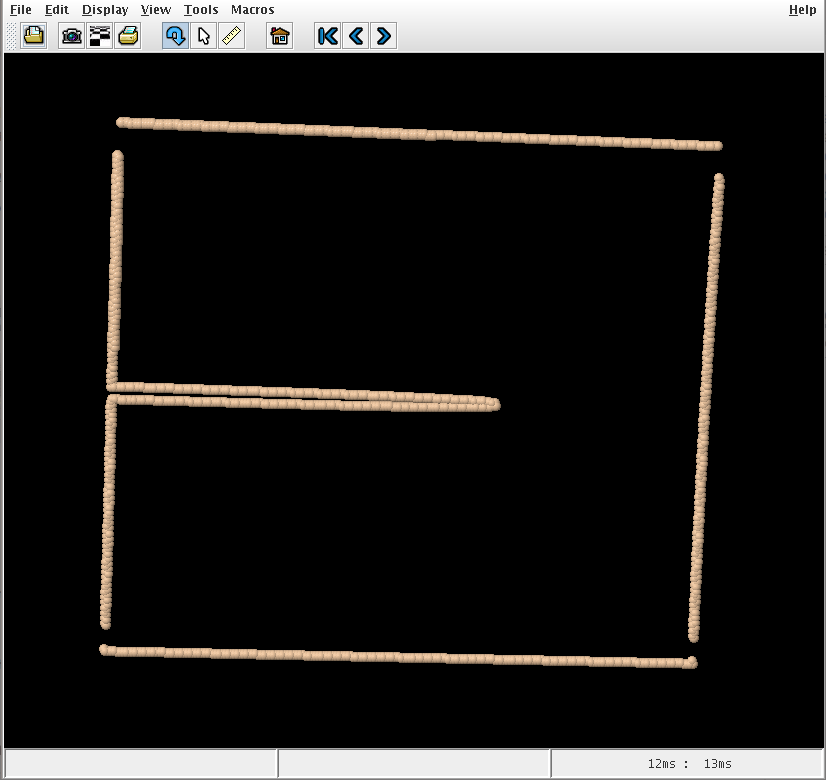 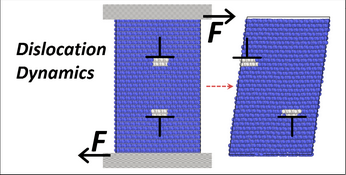 This tool is for those who would like to explore fundamental properties of materials such as dislocations, crack propagation, nanowire tensile testing, melting and the martensite transformation through atomistic Molecular Dynamics simulations.   All simulations in this explorer are powered by the LAMMPS simulation code. The tool is set up for default operation with sets of preselected inputs for those who are new to MD simulation.   Enabling the advanced functions allows users to define simulation parameters for their specific needs.

This set of tools will allow you to:

Instructions for downloading the simulation results from nanoHUB for local use. 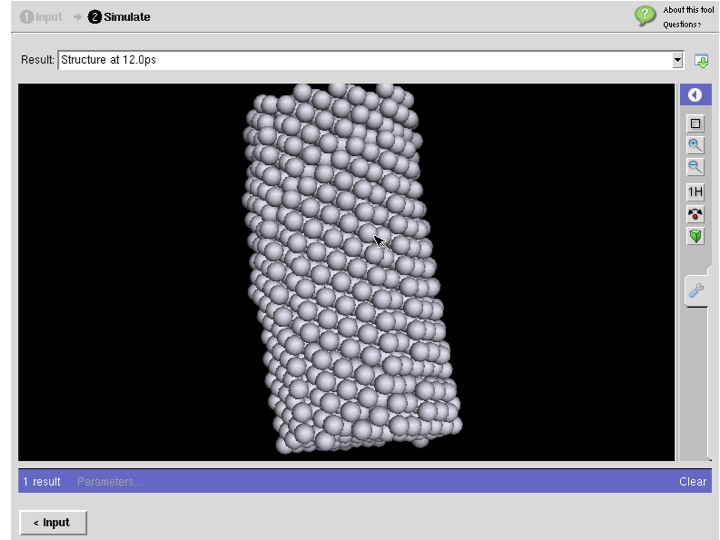 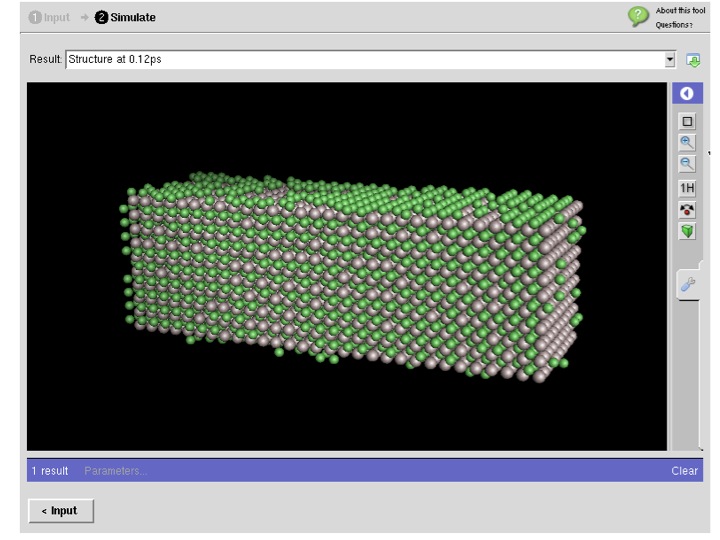 Hands-on tutorial that will get you started with the nanomaterials simulation toolkit.

This learning module describes how this simulation tool can be used to teach concepts about plastic deformation to sophomore-level MSE students.

This tool allows the user to simulate the effects of applying tensile stress at each end of a Copper nanowire.

The following simulations are run by the tool:

This tool will enable the users to calculate two heat transport properties: thermal conductivity and phonon relaxation time. The first one is to run thermal conductivity simulations on various Si/Ge structures by non-equilibrium MD with LAMMPS package. Pure Si/Ge bulks, pure Si/Ge square nanowires, or supperlattice Si/Ge nanolaminates and nanowires with different periodicity can be selected from the prebuilt structures. Also, users can create Si/Ge supperlattice structures with different sizes and the number of priods by their own. In addition to thermal conductivity, energies, temperature profiles, and atomic trajectories during the simulation will also be output. The second one is to run phonon relaxation time simulations on different bulk materials (e.g. Si and Ar) by spectral energy density analysis. Users can choose different temperature for their own needs. The phonon dispersion relation, relaxation time and mean free path with wave vector in 100 direction will be outputted. 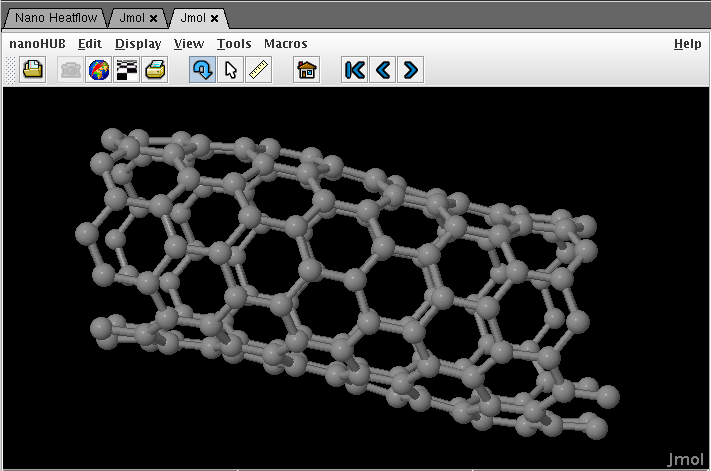 The Nano Heatflow tool allows users to explore the time evolution of kinetic and potential energy among the vibrational modes of a carbon nanotube over the course of a molecular dynamics (MD) simulation. It is possible to observe the cascade of vibrational energy through the modes of the system as a non-equilibrium population of phonons is dissipated towards thermal equilibrium, and thus gives insight into the intrinsic sources of damping and dissipation within nanoscale objects. 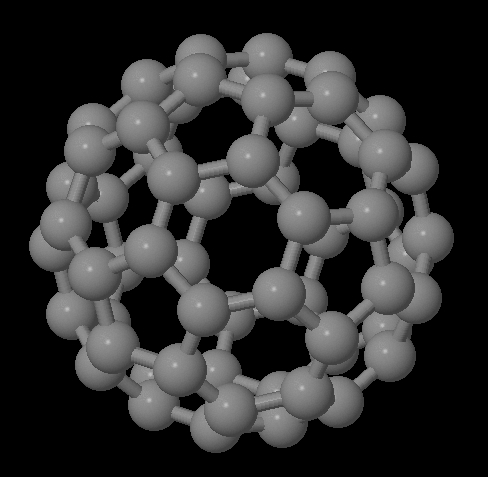 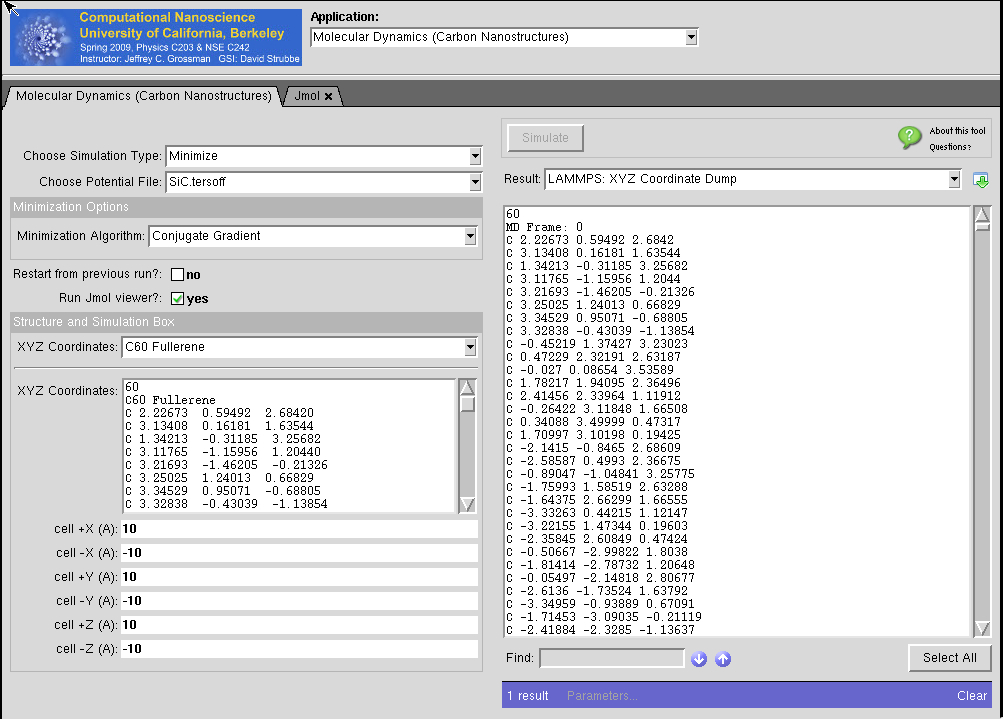 This tool is part of MIT Atomic-Scale Modeling Toolkit which serves Overview of Computational Nanoscience: a UC Berkeley Course.  Powered by LAMMPS. 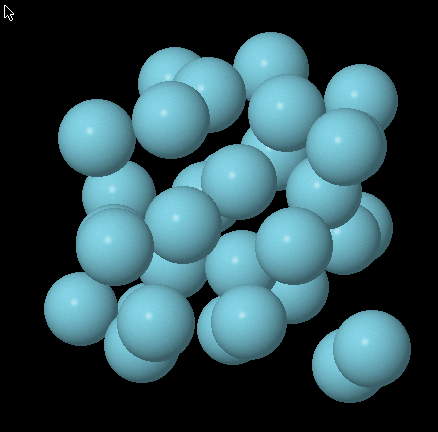 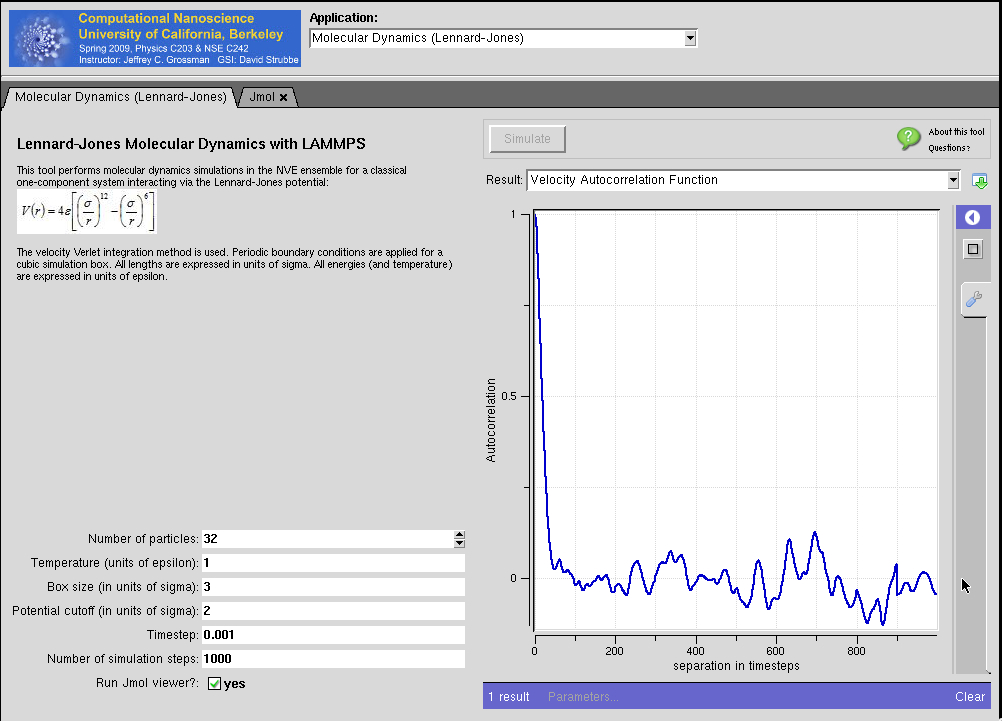 Powered by LAMMPS.
This tool is part of MIT Atomic-Scale Modeling Toolkit which serves Overview of Computational Nanoscience: a UC Berkeley Course 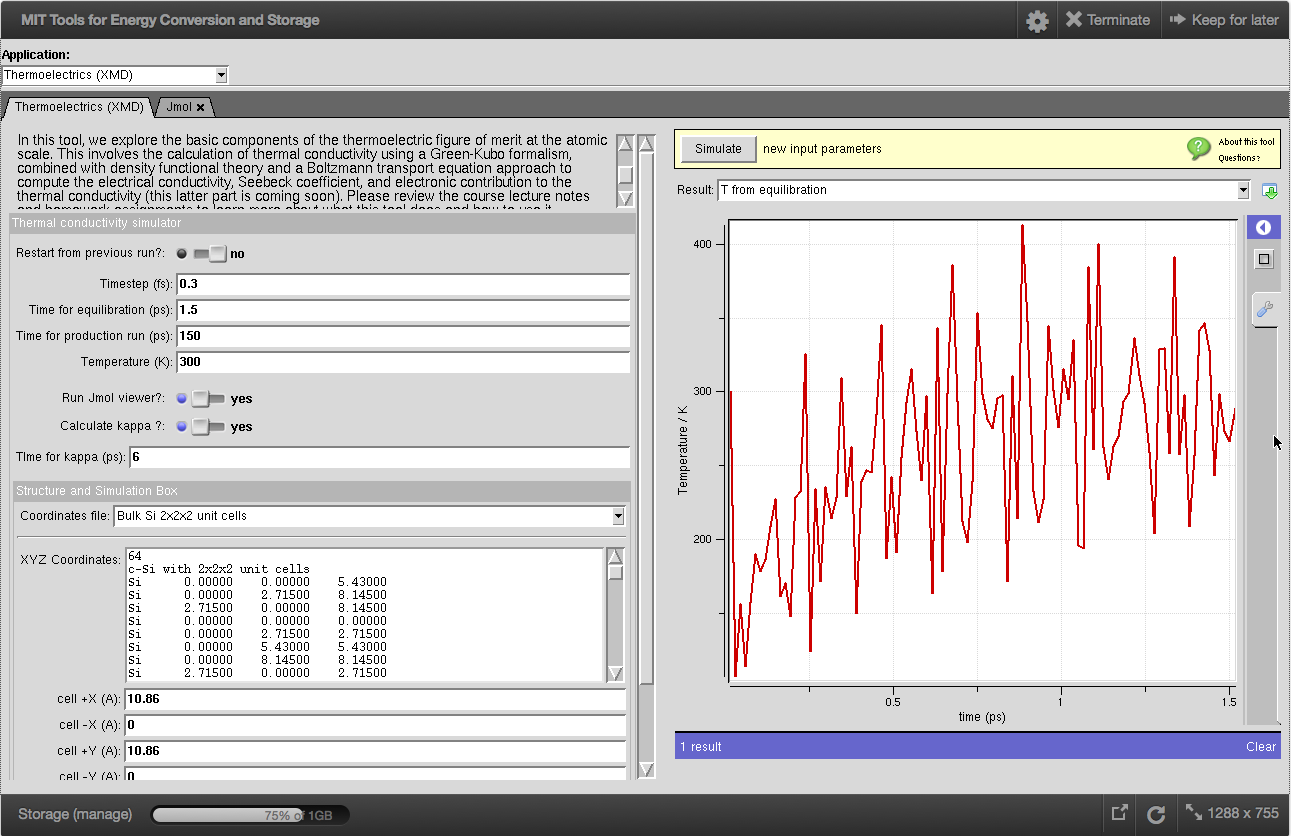 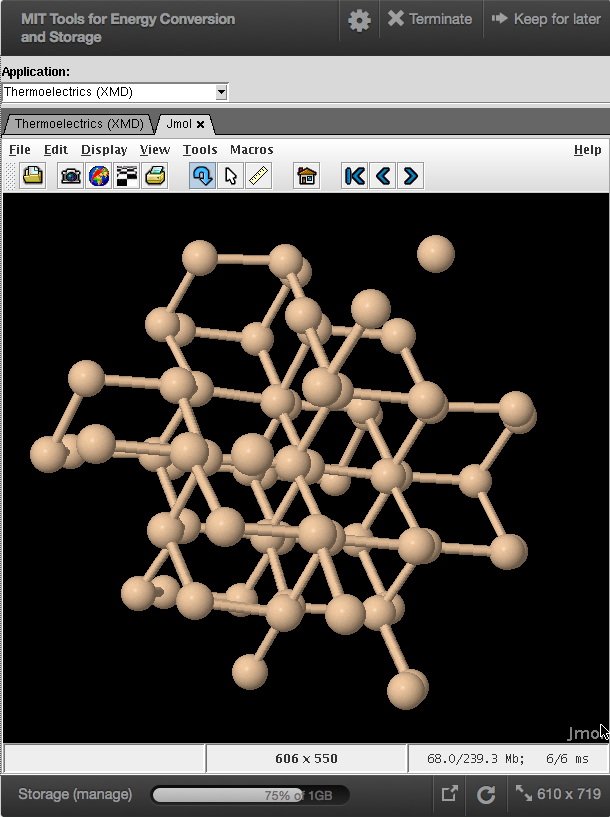 These tools allow students to focus on the atomic-scale physics and chemistry underlying four separate energy conversion and storage materials: thermoelectrics, solar fuels, solar photovoltaics, and hydrogen storage. Within each of these four different tools, the user can compute properties that are directly relevant to the key fundamental conversion and storage mechanisms.

Presentation:  Polymer Synthesis and Characterization in the Cloud: a nanoHUB Classroom Experience

This talk describes an atomistic molecular dynamics laboratory on 'soft materials' that was used in a junior-level course in materials science and engineering that had over 70 participants.  In this course, both molecular and continuum methods were studied and applied to relevant materials problems.  The objective of the laboratory was to perform state-of-the-art molecular dynamics in series and parallel, using the Polymatic and nuSIMM computational simulation tools on nanoHUB to study polymeric materials, which are amorphous and lack long-range order or periodicity in their structure.  Using these tools, students were able to set up simulations to build and visualize these materials structures and analyze the results.  They developed an understanding of which method(s) can be used to solve for some important materials problems.

The assignment was designed for undergraduate students who had little or no experience with running molecular dynamics simulations. It assumed no prior knowledge of either polymatic or nuSIMM. The use of online resources (tutorials) and in person training (hands-on sessions) were demonstrated to be effective tools of engagement.

Currently, Polymatic is written to work with the Large-scale Atomic/Molecular Massively Parallel Simulator (LAMMPS) with a class I or class II force field. However, the majority of the subroutines in the code do not rely on using LAMMPS or these force field definitions, such that the code could be easily extended to work with other force fields, file types, and software packages. 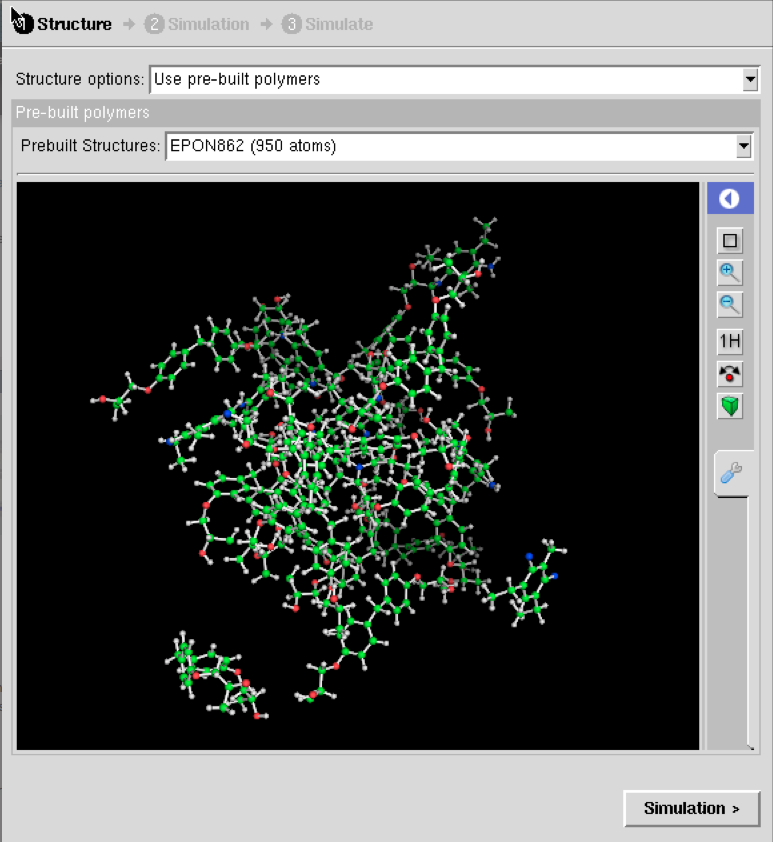 This tool provides a chain builder, with options to specify monomers, monomer arrangements (tacticity), torsion angles between monomers, system parameters such as density and temperature, as well as some prebuilt epoxy structures from current research interests. The resulting structure (constructed or prebuilt) can be used as input to LAMMPS to run molecular dynamics (MD) simulations. Many MD options are available.

This tool is designed to facilitate the “synthesis in the computer” of materials and characterize them requiring only building-block atomic information.

The second module, Equilibration, can be used to equilibrate a low density system to a realistic density for a given temperature and pressure in an entirely predictive manner using a compression/decompression simulation procedure described by Larsen, Lin, Hart and Colina (2011).

These two steps are often used in conjunction to design nanoporous polymeric materials for which the third module, Characterization, offers structural characterization capabilities implemented using Poreblazer v2.0 developed in the Sarkisov research group and published by Sarkisov and Harrison (2011). 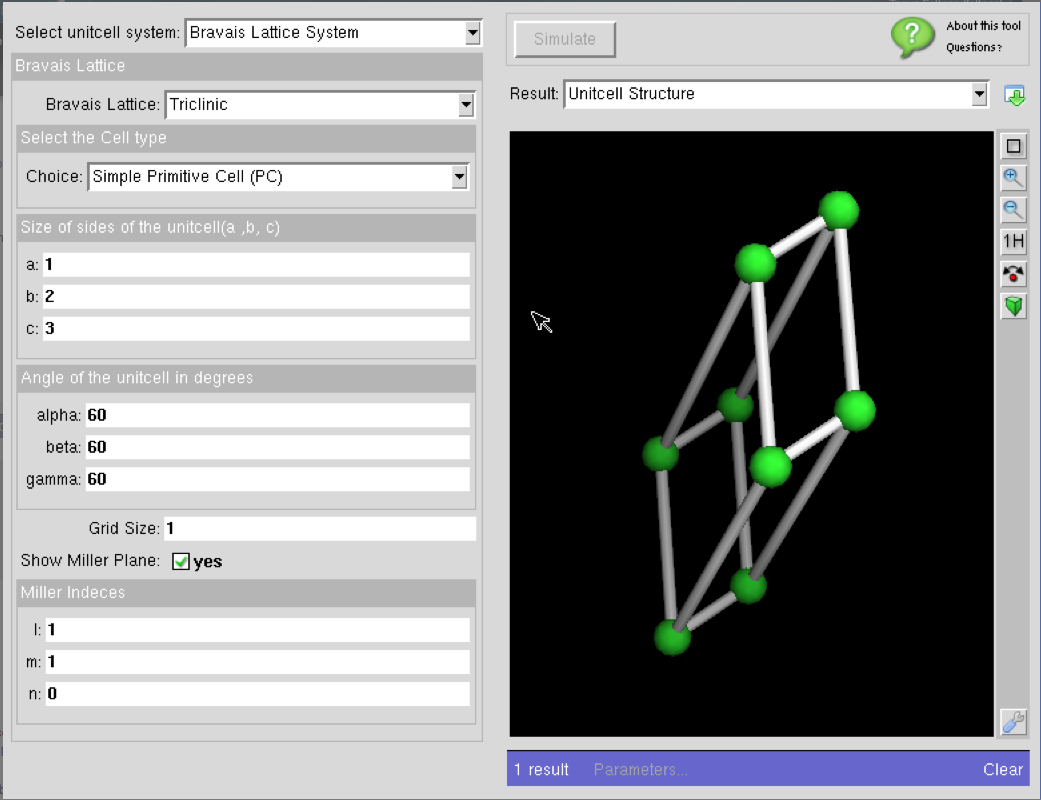 Crystal Viewer is a great introductory simulation tool that allows users to create unit cells of common materials as well as carbon nanostructures that include graphene, carbon nanotubes with varying chirality, and bucky balls.

Crystal Viewer 3.0 is a new tool starting from scratch that is based on the old version 2.3.4 but aims to include better visualization and new features.  It visualizes 14 Bravais lattices, Miller planes, and crystal structures of specific materials needed for many courses in materials science, electronics and solid state chemistry.  Users can also create and view materials not included in the database. The main purpose of this educational tool is to provide insight about the crystalline structure of various materials. 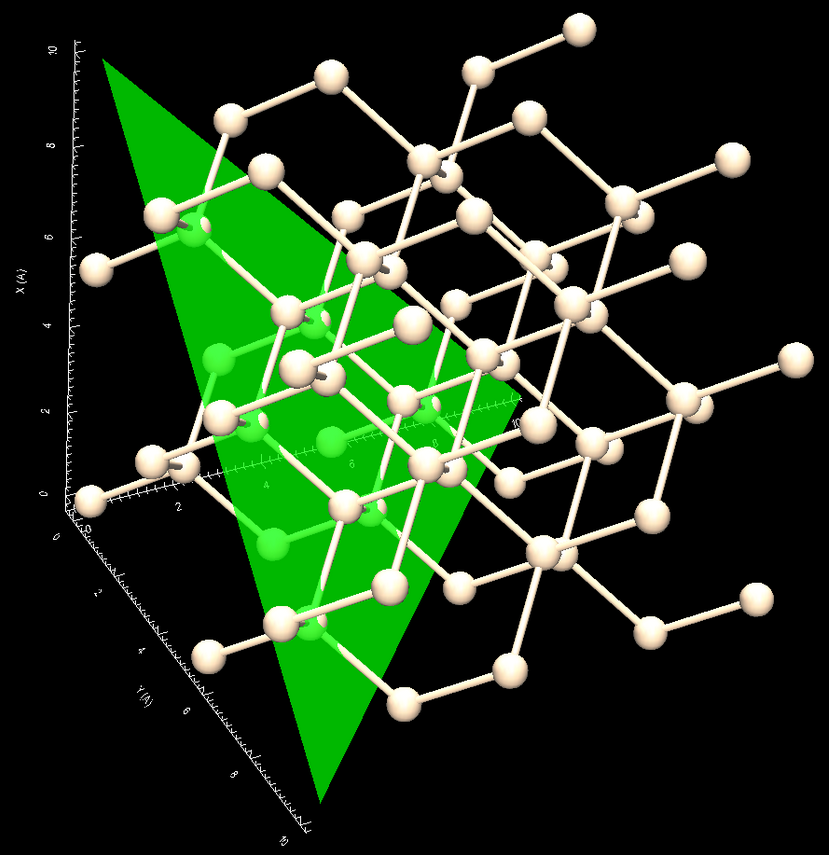 See the RASPA tools, which include: