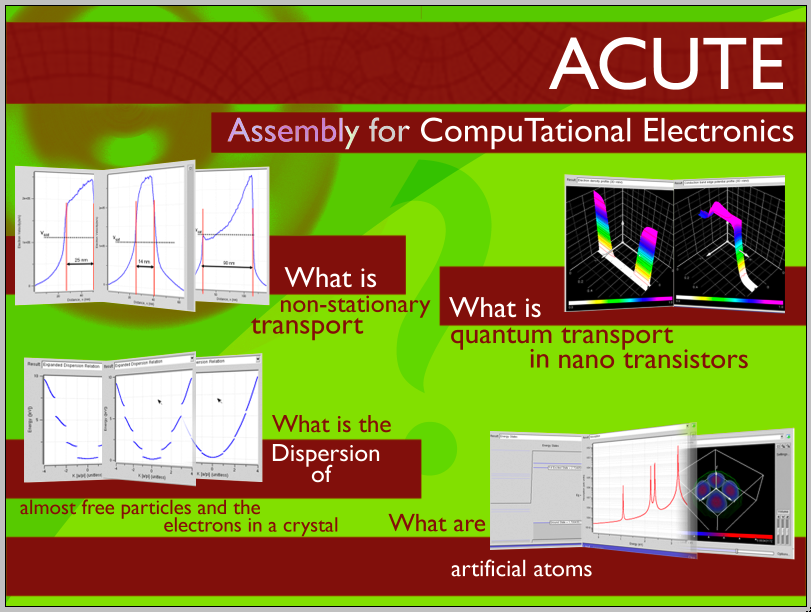 The Piecewise Constant Potential Barrier Tool in ACUTE allows users to calculate the transmission and the reflection coefficient of arbitrary five, seven, nine, eleven and 2n-segment piecewise constant potential energy profile. For the case of a multi-well structure, it also calculates the quasi-bound states. Thus the Piecewise Constant Potential Tool can be used as a simple demonstration tool for the formation of energy bands.

Other uses include: 1) in the case of stationary perturbation theory, as an exercise to test the validity of the first-order and the second-order correction to the ground state energy of the system due to small perturbations of the confining potential, and 2) as a test of the validity of the Wentzel–Kramers–Brillouin (WKB) approximation for triangular potential barriers.

The Periodic Potential Lab in ACUTE solves the time-independent Schrödinger Equation in a one-dimensional spatial potential variation. Rectangular, triangular, parabolic (harmonic), and Coulomb potential confinements can be considered. The user can determine energetic and spatial details of the potential profiles, compute the allowed and forbidden bands, plot the bands in a compact as well as an expanded zone, and compare the results against a simple effective-mass parabolic band. Transmission is also calculated. This lab also allows students to become familiar with the reduced-zone and expanded-zone representation of the dispersion relation (i. e. the E-k relation for carriers).

In solid-state physics, the electronic band structure (or simply band structure) of a solid describes ranges of energy that an electron is “forbidden” or “allowed” to have. It is due to the diffraction of the quantum mechanical electron waves in the periodic crystal lattice. The band structure of a material determines several characteristics, in particular its electronic and optical properties. The Band Structure Lab in ACUTE enables the study of bulk dispersion relationships of silicon (Si), gallium arsenide (GaAs), and indium arsenide (InAs). Plotting the full dispersion relation of different materials, students first get familiar with a band structure of direct bandgap (gallium arsenide and indium arsenide) and indirect band-gap semiconductors (silicon). In the case of multiple conduction band valleys, the user has first to determine the Miller indices of one of the equivalent valleys and then from that information it immediately follows, e. g., how many equivalent conduction bands one has in silicon and germanium (Ge).